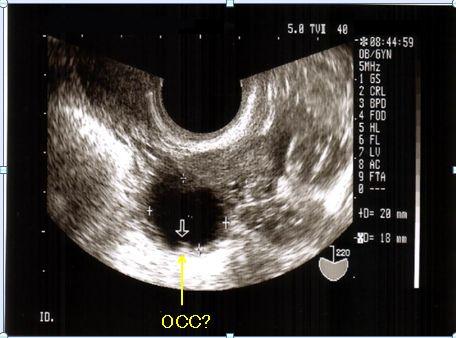 This image shows a 20 x 18 mm follicle, this was examined in about 20 years ago using a conventional ultrasound reflectoscope of the time (called Sonovista EX).
I can see an echo high body on the opposite side of this follicle to the probe head.
I wondered about it for 20 years.
Slide 3.
Egg observation device and ovum diagnosis method
After a great deal of research, I successfully invented a new ultrasound device for diagnosing OCCs in follicle using a UBM.
I obtained a patent for an egg observation device on January 6th, 2006.
It was called ST-TOMKO UBM, from “STerility-TOMography KOmputer UBM”.
Slide 4.
In January 2014, my plan received a further boost when Dr. Pai-Chi Li, a distinguished professor at National Taiwan University, became a joint developer of ST-TOMKO UBM.
This slide shows his UBM.
Slide 5.
Image using Prospect 40MHz about Cumulus cells
in balloon 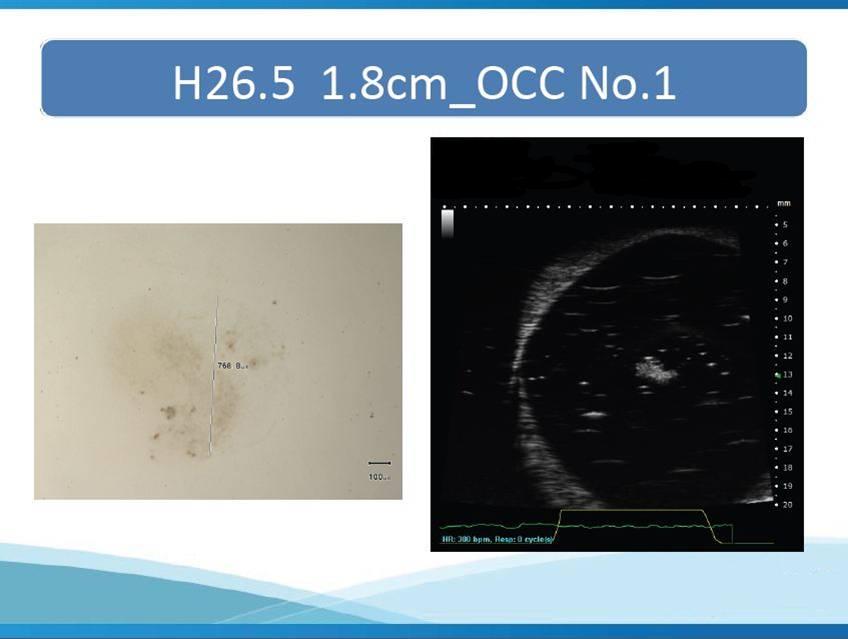 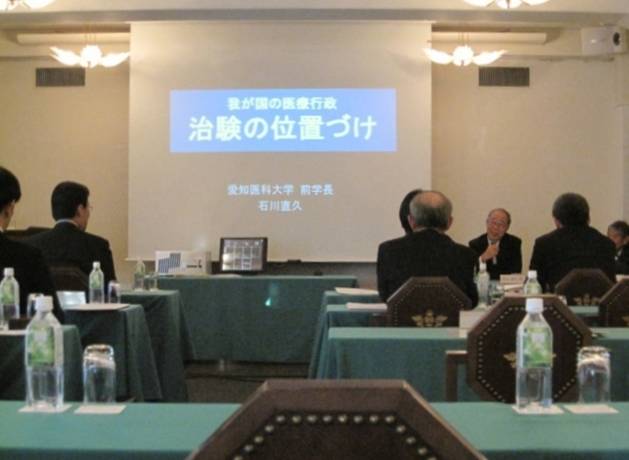 In order to carry out clinical trials for actual imaging of human OCCs in follicles,
I consulted Dr. Naohisa Ishikawa, chairman of the NPO the Aichi Clinical Trials Ethics Committee and former President of Aichi Medical University,  and held a Fujisawa Frauen Klinik Ethics Committee with Dr. Ishikawa, with members of Fujisawa Frauen Klinik’s ethics committee also present.
As a result of these consultations, a project plan for clinical trials for the imaging of OCCs in human ovarian follicles using ST-TOMKO UBM was created. 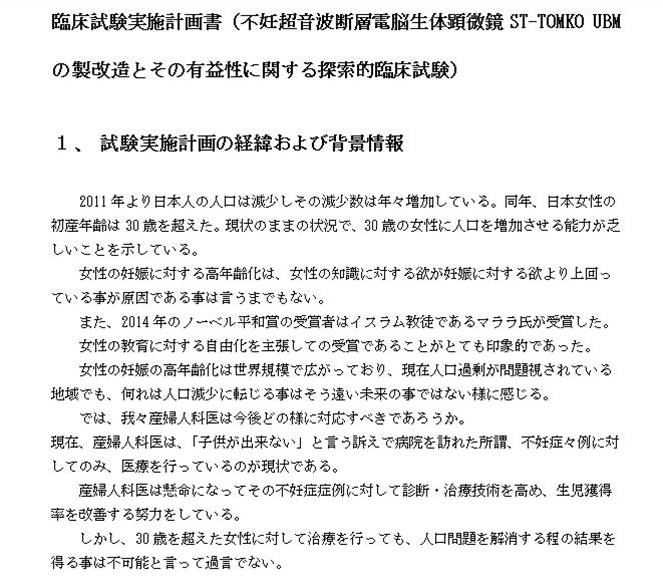 This is the project plan for clinical trials which was decided through the Ethics Committee. 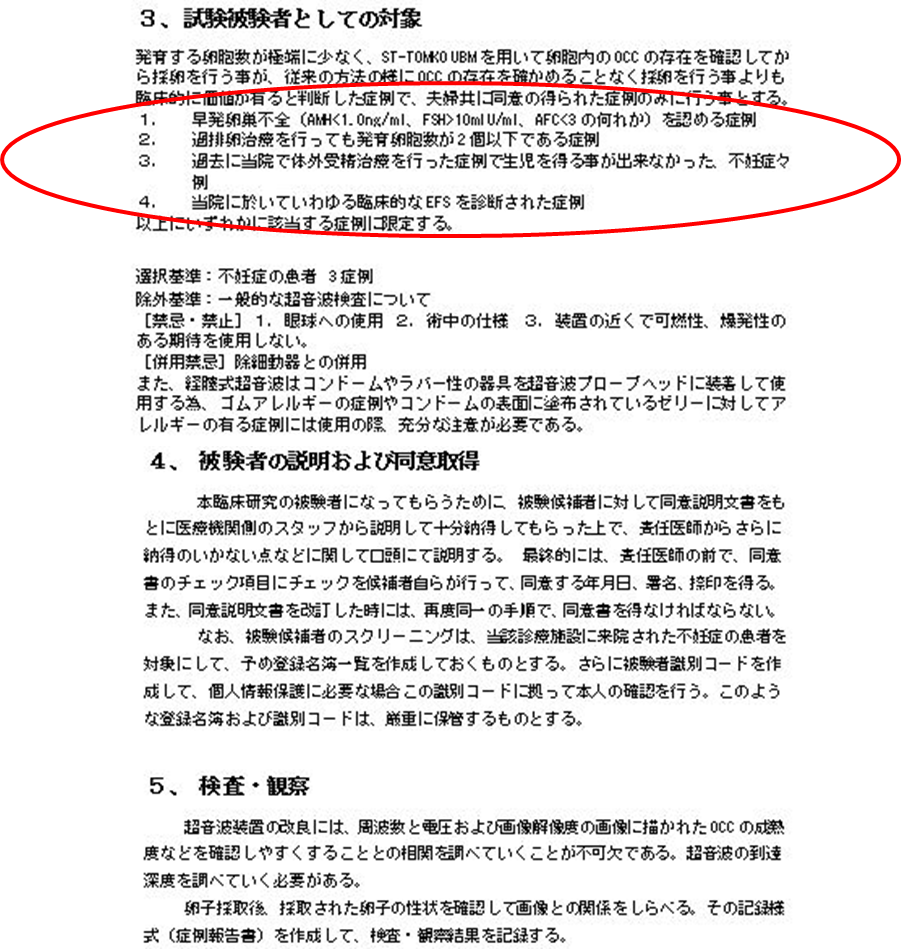 The targets for the clinical trials are followings.
1. Premature ovarian insufficiency patients: AMH<1.0 ng/ml, FSH>10 mIU/ml, AFC<3 (menstral cycle D5).
2. Patients in whom fewer than two follicles develop even under superovulation.
3. Patients who have not been able to have a baby after undergoing IVF treatment several times.
4. Patients who have been diagnosed with so-called Empty Follicle Syndrome through IVF treatment.

I began clinical trials after obtaining patients’ informed consent with regard to the content of the project plan for clinical trials related to the benefits of the ST-TOMKO UBM , and improvement of same. 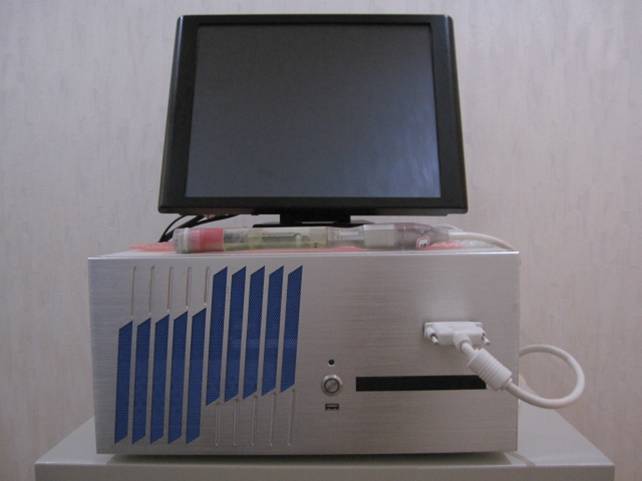 This is ST-TOMKO UBM Prototype 1’s probe, which Dr. Li developed by modifying a his UBM probe so that it could have a diameter of less than 3 cm and would therefore be suitable for gynecological specifications. 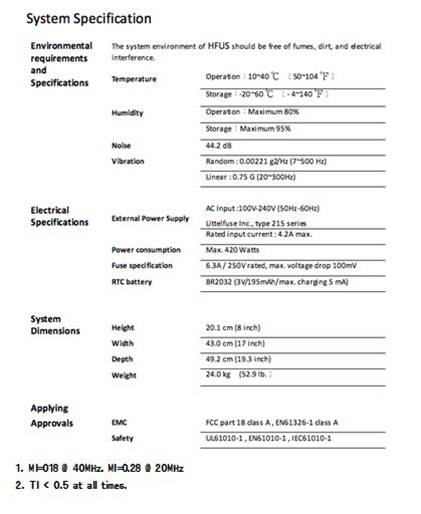 This is the System Specification.
As indicated here, ST-TOMKO UBM’s Mechanical Index is 0.28 at 20MHz and 0.18 at 40MHz, and the Thermal Index is under 0.5.
Both indices meet the safety standards of the FDA, the American Institute of Ultrasound in Medicine (AIUM), and the Electronic Industries Alliance.
Similar UBMs are already being used as medical instruments in ophthalmology, and in veterinary reproductive medicine for mammals (especially bovines).

This is an animation of a follicle measuring about 2×2 mm the early antral follicle.
Some light shading can be seen under the follicle.

This animation repeats the same few seconds’ worth of frames over and over.
This is because even if the probe is being held steady, just the movement from the patient’s breathing is enough to make an object that might be an OCC disappear from the screen.

It is important to be aware of how difficult it is to capture such a small object manually.

The method of identifying an OCC during a scan is to search every nook and cranny of the follicle wall slowly and thoroughly.
Other than an OCC, there can be no object with an echo low center of about 80 to 100 μm surrounded by echo high . It is therefore important to operate the probe more slowly after such an object has been found.

Slide 14.
Enlarged image of OCC in an early antral follicle
OCC diameter is around 135 μm
Follicle size is 2mm×2mm

This is an enlarged static image from the previous animation.
In a follicle , it is possible to identify an approximately 80-μm-diameter oocyte,
and around it an echo high object thought to be a corona radiate.
It seem to be OCC is about 135μmΦ.

This patient grew another two Graafian follicles in another location.
So, I had to perform oocyte collection very quickly.
I tried using a 22-gage needle to collect oocytes from this early antral follicle.
But I was unable to collect oocytes from such a small antral follicle.
The reason for this was that granulosa cells and cumulus cells in a follicle under 5 mm in diameter do not have a receptor for LH.
Consequently the OCC cannot expand, and cannot pare off from inside the follicle wall. So, I could not retrieve the OCC from this follicle.
Slide 15.
An animation of OCC in a latter period antral follicle scanned by ST-TOMKO UBM
Follicle size is 15mmΦ
This animation was made by scanning inside a latter period antral follicle using ST-TOMKO UBM.
Fortunately, there was a 15-mm-diameter OCC on the side of the follicle nearest to the probe head, so an OCC-like image could be obtained.

For the animation, the scan was made at a position about 5 to 10 mm from the probe head.

For me, this animation is a memento of the first scan I performed from outside the body of a patient.
Slide 16.
Enlarged static image of a latter period OCC in follicle scanned by ST-TOMKO UBM
OCC size is 200mmΦ

This is an enlarged view.
From the size,it is thought to be an oocyte of diameter about 100μm.
Around the oocyte we can see an object like a corona radiate, picked up as echo high.
The total size is about 200μm in diameter.
So, this is thought to be an OCC before undergoing expansion.
Slide 17.
Optical microscope image of OCC from scanned follicle 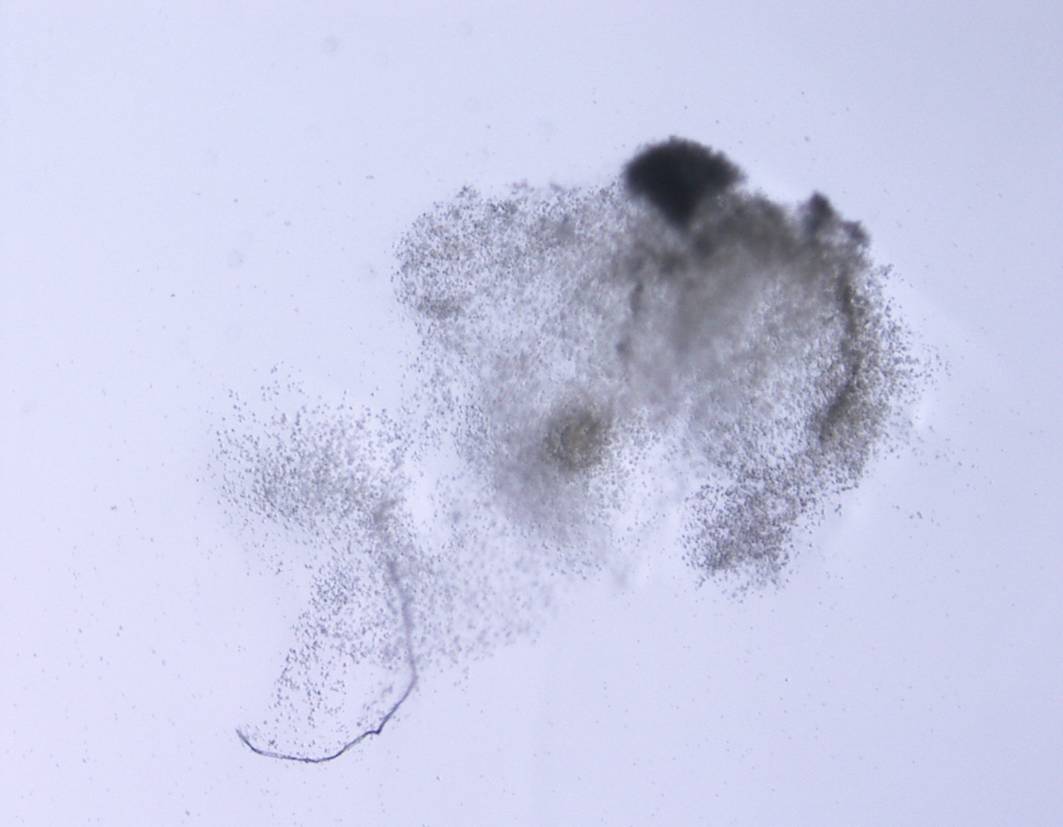 This is an optical microscope picture of an OCC which was actually retrieved from the follicle in the previous scan.
In this picture, the cumulus cells are about 400μm in diameter.
However, in the ST-TOMKO UBM image, it was not possible to detect cumulus cells which had yet to undergo expansion.

I will be able to get better images by increasing the number of cases studied, bringing the probe head closer to the follicles, adjusting the UBM frequency, out-put and gain and so on.
Slide 18.
Animation  of cortex and medulla of ovary scanned by ST-TOMKO UBM
This animation is a scanned image of an ovary surface.
We can distinguish the cortex and medulla of the ovary.
Slide 19.
Smallest antral follicle in ovary scanned by ST-TOMKO UBM

This animation shows the smallest early antral follicle in the cortex of the ovary, witch I can detect within 1 mm of the surface.
Slide 20.
Smallest antral follicle
Follicle size is 200μmΦ 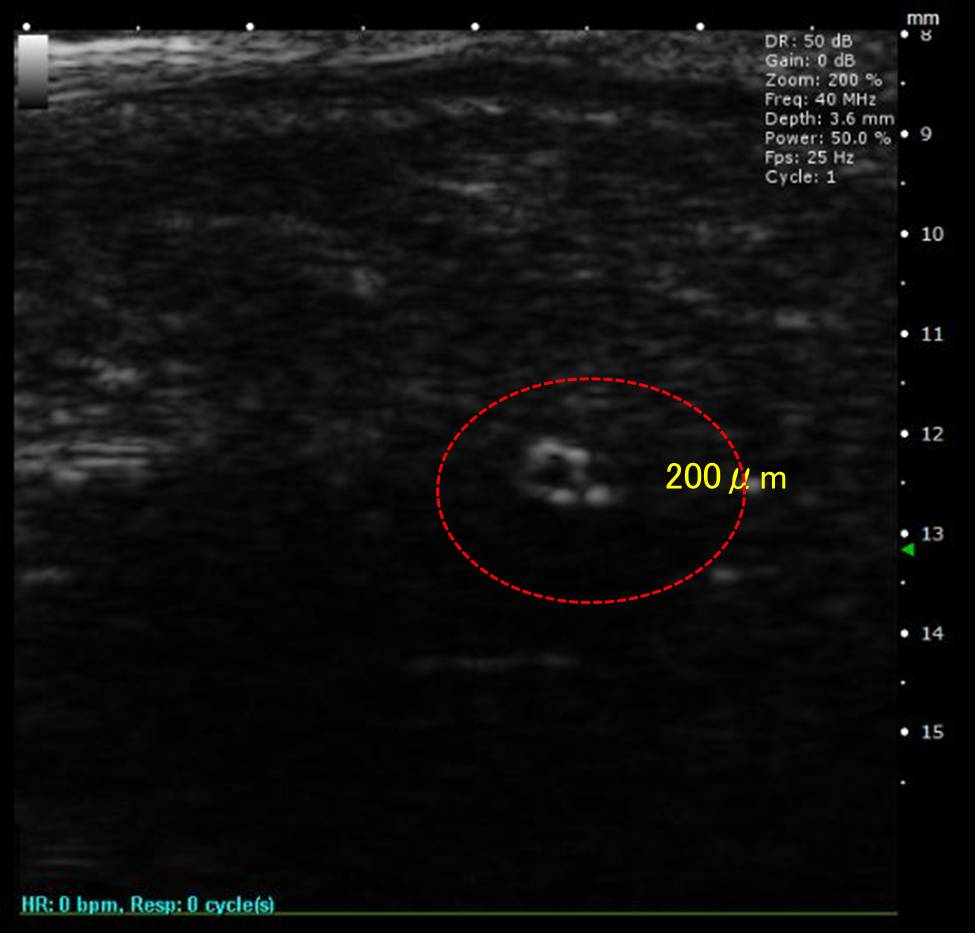 This early antral follicle is 200μm in diameter.
Slide 21.
Conclusion